One of the nice things about being out in the real world is having holidays off, since Midd never really seemed to go by the normal holiday schedule everyone else follows.  It has been a most relaxing weekend so far, and it's not over yet!  I love being able to check lots of little things off my to-do list. 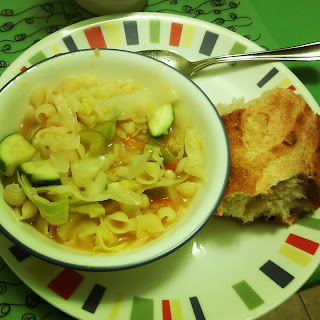 Today was a culinary adventure...I made my first soup, a minestrone!  Homemade soup is one of my favorite meals, and I decided to finally be brave and try it.  It was a long process, starting with soaking the beans last night, but it turned out great.  I think soup is the best winter dinner.  It's so cozy and delicious.  I'm excited that I have a ton of leftovers for this week and beyond. 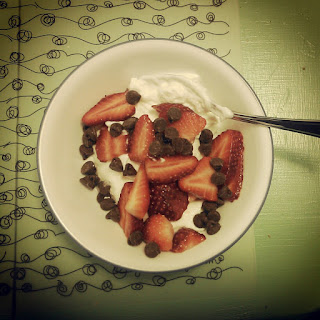 And another food picture from today, my delicious lunch of greek yogurt, strawberries (that were on major sale since it's post Valentine's!!) and chocolate chips.  Yummy :)

In non-food news: I watched Definitely, Maybe and the latest episode of Glee (Valentine's version).  Both were very cute, and made me hopeful about the state of romance.  I still can't get over that the main character's name in Definitely, Maybe is Will Hayes - it was so weird to hear it over and over throughout the movie.

And finally, some musical picks.  Maroon 5 usually isn't my favorite band, but I really like this song, and this version of it is pretty cool, especially the didgeridoo!  And secondly, in homage to the flute, here's a cool group called Project Trio that my mom told me about.  They were recently featured on NPR, and they play some pretty awesome chamber music.  Here's a link to their version of music from the Nutcracker.

Well, that's it for now.  Happy President's Day!
Posted by Unknown at 9:37 PM