Our trip to Canada was very interesting...Québec is an entirely different place in June (rather than February)!  We went to the Musée de la Civilisation in the city, which usually has good exhibits.  This time, there was one on different world religions and another on food.  The food exhibit was pretty thought-provoking and cool to look at.  It's based on a book called "Hungry Planet" that came out in 2005 and shows photos of how much food families around the world consume in a week, including costs in US dollars.  Here's a link with some of the pictures: http://www.foodmatters.tv/_webapp_482785/What_The_World_Eats_-_Shocking_Photos 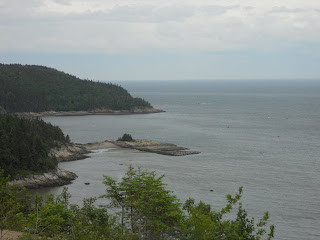 We saw some cute little towns farther north along the St. Lawrence.  There were great views of the river, lots of lupines, and I experienced a new side of the area.  I complained about driving 8 hours north for a vacation, but it was good.

I'm getting excited for fireworks this weekend at the Sea Dogs game and the Portland show on Monday.  Should be great!  Though I can't believe it's already July...where is the summer going?

canada was fun
pretty sights and lots of french
(but not the mail strike!)
Posted by Unknown at 11:07 PM